Search
The Energy Drink
Pub murals, the Irish language and Guinness for energy. 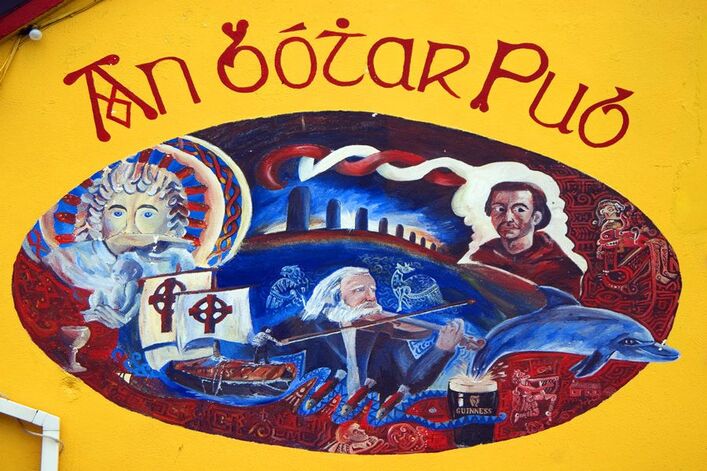 Many Irish pubs are rightly famed for their murals. I found this one in 2008 on the wall of An Bóthar (The Road) Pub in the Gaeltacht (Irish speaking) Dingle Peninsula of County Kerry. It includes all the stereotypical Irish cultural icons; a fiddle player (who looks to me like a caricature of the Australian multi-instrumentalist including fiddle player Warren Ellis), a monk, Guinness, Celtic crosses, Neolithic monuments etc. The pub's name is written in An Cló Gaelach, the traditional Irish script. I have some familiarity with the younger sibling to the Irish language, Scottish Gaelic, having lived in the Scottish Highlands for a few years and worked with several Gaelic speaking people from the Outer Hebrides. I made a little effort to learn some of the language, so written Irish in modern text is somewhat familiar to me, especially as the spellings in contemporary Irish are often simplified relative to its Scottish cousin. However, I do find the traditional Irish script difficult to read because it has now become so diversely stylised. In the sign above I mistook the first letter of the second word for a 'D' and made an amadán beag of myself (‘bit of a fool’; it's just about the same in Scottish Gaelic) when inquiring why the pub was called An Dóthar.

I've since learned that this wonderful work of art no longer adorns the end wall of the pub, being replaced by a copy of a vintage advertisement for Guinness and the pub name in a modern, diluted version of An Cló Gaelach. Is mór an trua!

​Below are some more pub murals. The top left is my favourite. It's a giant vintage advertisement for Guinness also found on a pub wall in the Gaeltacht of County Kerry. This is one of the many artworks produced by John Gilroy in the 1930s and mint copies of the original prints are now worth big money at auction. The translation is 'Guinness, the energy drink' (again, it's the same in Irish as in Scottish Gaelic). I do enjoy an occasional Guinness or two but bestowing energy isn't the effect the velvety beverage usually has on me. The one underneath suggests that drinking Guinness makes you feel better. No argument there.