Search
Confessions Of A Praktica Geek
A brief homage to the now defunct and greatly underrated Praktica range of SLR cameras.

Hover images for some technical info, click to enlarge.

I confess to being a Praktica geek. My first serious camera was a Praktica SLR and it proved to be the cause of a bad dose of gear acquisition syndrome. I started collecting them. Eventually I had every mass-produced SLR Praktica ever made. I'm cured now and have long since given many cameras and lenses away to a camera club. But I'm always pleased to make the acquaintance when I encounter the increasingly rare scene of a fellow photographer using a good old Praktica. The BC3 from 1987/88 is my favourite model, especially when coupled with the autowinder, which makes a very cool, now very seldom heard ziiiiip! sound immediately following the famously loud, but always reassuring, Praktica shutter clap. It looks good in a very 80s sort of way, it fits perfectly in my relatively small hands and I find it to be a very well balanced and sturdy machine. It's actually a BC1 with some cosmetic changes, made for the British and Dutch markets and so can be hard to source elsewhere. The old Carl Zeiss Jena Pancolar 50mm f1.8 was my favourite lens (an f1.4 was also available, but alas not for me). It can be very sharp indeed stopped down past f4. For me, though, it was the wonderful strong contrast that appealed, a perfect accompaniment to the expanded latitude of some of the monochrome films of the day, as Ilford Delta 100 and this old Ford with the bashed in face testifies. Very special mention goes also to the Carl Zeiss Jena Sonnar 135mm f2.8 and the Flektogon 20mm f2.8 (which unfortunately I've also never owned) as well as the Flektogon 35mm f2.4 which one apparently well-informed website from the USA described as having ".......an interesting, almost film like look."
​While I can’t claim to have taken any of my Prakticas into space, like the EE2 used on board the Soviet space station Salyut 6 in 1978, I have used Prakticas on every continent except South America. Sometimes they get noticed and become the centre of attention. A few years ago I was sitting at a pavement café in Paris with my mint condition 1967 Nova PL hanging around my neck, and a Japanese tourist actually offered to buy it. He was sporting its same-age, though bigger medium-format sister, the Pentacon 6. He collected old German cameras, but I had to decline the offer. Another time, I was in Istanbul with my BC3 when I found myself in the middle of a mob of teenagers photographing an outdoor market, all art students equipped with identical hipster Lomos. Quite a few of them took an interest in the similarly dated look of the BC3 and took turns looking through the viewfinder.

Some people rubbish Prakticas and claim they did not perform well. This is an unfair stereotype; it's worth noting that few such detractors seem to speak from any accumulation of experience. Another frequently encountered claim is that Praktica built only basic, technologically primitive cameras. Well, considering they ended development of SLRs in the early 1990s this is certainly true today, but nothing could be further from the truth in their heyday. They were always a highly innovative company, especially regarding the use of electronics. The only important innovations they failed to either invent or take-up were in-body autofocus and spot metering. Both were intended for the model following the BX20S, but as this was the last SLR model Praktica made (with an unusually prolonged life from 1990-2001) neither eventuated. Nevertheless, autofocus lenses became available in the late 1980s, the Prakticar AF 55-200mm f4-5.6, and the much rarer Prakticar AF 75-200 f4.5 Macro, both manufactured in Japan by Sigma.

​The most common example of short-changing the Praktica contribution to photographic technology concerns the M42 screw mount, which became pretty well universally used by camera and lens manufacturers in the 1960s-80s, either as the native mount or in tandem with an adaptor. It speaks volumes that these adaptors are still manufactured and sold today. Carl Zeiss designed the mount in 1938 at their Jena facility, specifically for an intended Praktica line of cameras, though production did not commence due to the Second World War. After 1945 the Jena factory found itself within East Germany. The first camera built with an M42 lens mount was the Zeiss Icon Contax S in 1947, manufactured by the now East German state-owned company, who also produced the Praktica and Exakta ranges. The Contax S was also the first SLR with a "straight view finder", or a built-in pentaprism viewfinder at eye level, offering for the first time an unreversed viewfinder image. This model was made available in the USA three years later, as this advertisement from the March 1950 edition of 'Photographer' magazine shows: 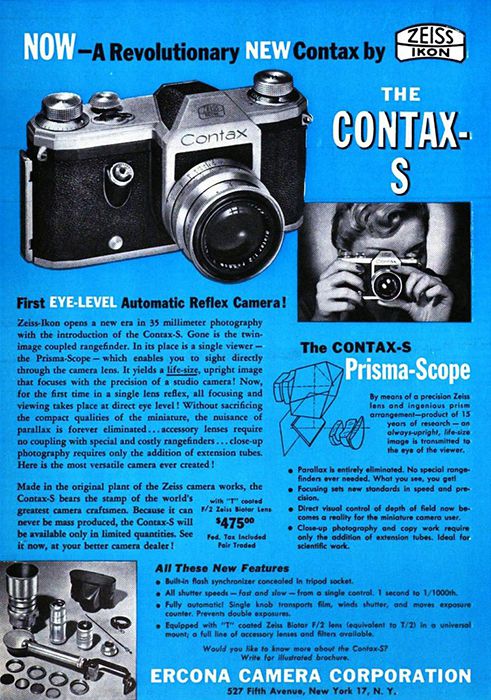 ​The first M42 mount camera available under the Praktica name was the Prakticaflex FX II, launched in 1949. Nonetheless, it is commonplace to see the M42 mount referred to as the 'Pentax M42' mount in US sources, even when describing Praktica cameras. For example, one well-read website of US origin actually recommends the older Prakticas for those wanting to try film photography because they are ".......a versatile film camera purchase with a great deal of available lenses due to their early adoption of the universal Pentax mount." This is despite the first Pentax camera with an M42 mount appearing a full 10 years later than the first Praktica model. The fact is no camera made has ever sported a 'Pentax M42' mount, including all the Pentax models; they all properly had Contax/Praktica M42 mounts.
​Further innovations introduced by the postwar East German Praktica/Exakta/Contax stable are outlined below. If this list of innovations were announced without the brand being identified I imagine most people, enthusiast photographers included, would assume that a Japanese and not an East German company was responsible.